Map and site plan of the museums 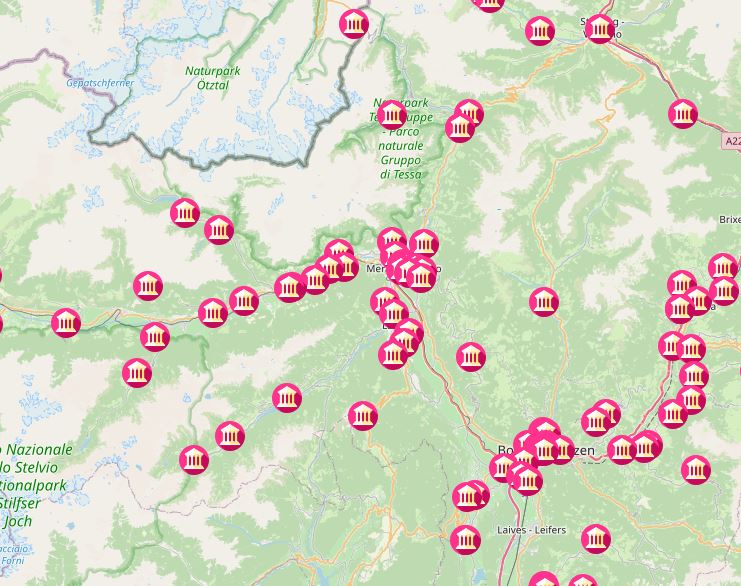 Mark your Favourite Museums and you will receive the most important information about them as soon as possible as a short message on your mobile phone.

Opening hours: In high season every 1st and 3rd Friday of the month from 5 - 6 PM

The foto-forum gallery is a platform for photography. With exhibitions and other activities, communicative, creative and artistic positions in photography are presented and conveyed. The exhibition programme provides insights into current photography with a broad spectrum of artistic and documentary works by photographers from Tyrol and abroad. Flashbacks to highlights of the history of photography round off how the gallery provides information.

The gallery spans two floors. The main exhibition room has an interesting shape and is well suited for presenting photography. The viewer has the possibility to view works up close as well as from a generous distance. The foto-forum gallery is equipped for visitors with special needs.

At the end of the world: World of ice

The museum in Sulden am Ortler, an underground structure at 1900 m above sea-level, is devoted to the world of ice. “At the end of the world” we call it. That is what it says on a 1771 map drawn by Peter Anich showing the glacier on the Ortler, beneath which the Ice Museum is located. At MMM Ortles Reinhold Messner tells of the Terrors of Ice and Darkness, Snow People and Snow Lions, the Whiteout and the Third Pole. The museum houses the world’s biggest collection of Ortler paintings as well as ice-climbing gear from two centuries. Skiing, ice-climbing and expeditions to the Poles are the themes. Visitors find themselves inside the mountain, where they are given a clear picture of ice mountains, the Arctic and Antarctic, the power of avalanches, and the pains taken by artists to depict the world of ice. Outside, the ice is very real, and round the corner the Yak&Yeti offers fine fare from the snows of the Himalayas as well as the typical dishes of South Tyrol.

Prösels Castle was built around 1200 by the Counts von Völs, aristocratic servants of the Bishops of Bressanone. In the early 16th century it was extended and converted by the Governor of Tyrol, Leonhard von Völs, to a Renaissance castle. The current castle is almost exclusively Leonhard’s works. 1981 the castle was purchased by the KURATORIUM SCHLOSS PRÖSELS GmbH.

Prösels Castle is open for guided tours from 1 May to 31 October. Saturday closed!

The castle can also be hired for unforgettable celebrations (weddings, work anniversaries, birthdays).

Visit Prösels Castle and spend unforgettable hours in the historic courtyard, in the idyllic chapel, the cosy fireplace room, the splendid knight’s hall, the private rooms of Leonhard von Völs and in the terrifying armoury.

From 1 May to 31 October Prösels Castle is open to visitors who must be part of a guided tour. Closed Saturdays

Purchase your tickets half an hour before the guided tour in the coffee shop next to the castle gates.

German and Italian speaking visitors are taken by a guide, for all other visitors guided audio tours are offered in English.

The enchanted mountain: Man's encounter with the mountains

As the centerpiece of the Messner Mountain Museum, MMM Firmian in Sigmundskron Castle near Bozen addresses the subject of man’s encounter with the mountains. In a setting dominated by the various peaks between the Schlern and the Texel range, the museum is spacious enough to be organized as an itinerary between the various works of art, installations and relics that it houses. The paths, stairs and towers lead visitors from the depths of the mountain, where their origins and exploitation are brought to life, and the religious significance of the peaks as an aid to orientation and a bridge to the beyond, to the history of mountaineering and the alpine tourist industry that we know today.

MMM Firmian is open from the third Sunday in March to the second Sunday in November. 10 a.m. – 6 p.m.

The heritage of the Mountain: the mountain peoples

MMM Ripa is part of a six-centered encounter with the mountains. Reinhold Messner has chosen Bruneck Castle, once the summer residence of the prince bishops, to present mountain peoples from Asia, Africa, South America and Europe, and to reflect on their cultures, religions and tourism activities. The mountain culture is reflected in the daily lives of their inhabitants, who impart life and history to the mountains of the world. This heritage of the mountains, which has ensured survival over the millennia for the people living high up on the brink of life, can now be appreciated at MMM Ripa – with the help of their dwellings, videos and encounters.

Surrounded by mountain farms and offering views of the popular Kronplatz skiing and walking area, the rural scenery of the Ahrn Valley and the mighty Zillertal Alps, it is the ideal location for MMM Ripa (in Tibetan: ri=mountain, pa=man).

Myth of mountain: The religious dimension of the mountains

The museum in Juval Castle in Vinschgau is dedicated to the Magic of the Mountain and houses several fine art collections: a Tibetica collection, a gallery of paintings of the world’s holy mountains, a collection of masks from five continents, a unique Gesar of Ling exhibition, a Tantra Room and the Expedition Cellar. Trained guides are available to explain all the exhibits. There is also a small mountain zoo, home-grown produce at the Schlosswirt tavern, excellent wines in Unterortl and, at the foot of the hill, a farmhouse shop. Juval Castle always makes a big impression in so many ways.

Guided tours only | Closed on Wednesdays

MMM Corones, situated on the summit plateau of Kronplatz (2,275 m), is dedicated to traditional mountaineering, which has strongly influenced – and has been strongly influenced by – Reinhold Messner. The museum is devoted to mountain history and also offers unique views of the great mountain walls of the Dolomites and the Alps. At the edge of the most magnificent viewing platform in South Tyrol, in the distinctive museum building created by Zaha Hadid, the view goes beyond the borders of South Tyrol to all points of the compass: from the Lienz Dolomites in the east to the Ortler in the west, from the Marmolada in the south to the Zillertal Alps in the north.

MMM Corones is open from the first Saturday of June to the second Sunday of October and from the end of November to mid-April (corresponding to the opening hours of the ropeways). 10 a.m. – 4 p.m.

In the basement, the former stable, the Plattner Bienenhof presents a collection of traditional objects concerning historical apiculture, which are explained during the guiding tour.

Besides films about apiculture and bee research are shown to the visitors.

The first profitable gardens arose when the nomads began to settle down. In South-Tyrol they are often rectangular or square. All kitchen gardens were used to grow local vegetables and plants in one and the same garden, which was divided up by means of paths, geometrically built beds, often with frames and a simple fence made of wood. The fence had to keep out animals and people. There was even a law which ordered the building of a fence.

The fence had to be as high as the shoulder of an adult. The plants of the garden have a long tradition and for example in a script in the library of the monastery of the Franciscan Friars from the year 1743 you can read about "Visélen", the word used even today the south-tyrolian dialect when talking about beans. In former times, when meat was hard to get and very expensive, beans were a very important source of protein.

Here you find our opening hours

Children up to 6 years free entrance

Groups of at least 8 people 5,00 Euro per person

BZ '18-'45: A permanent exhibition within the Monument to Victory

Magic of the Water

Museum of Modern and Contemporary Art

Museum of People through Time

Museum of the Convent Muestair

Museum in the Residence of Bishop Johannes Zwerger